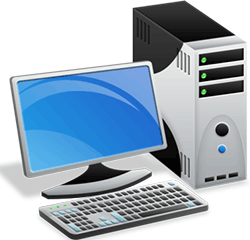 This computer required so much electricity that the lights in the towns and cities close by dimmed every time that it was turned on! It was huge and it weighed 30 tons and took up about 1500 square feet of interior floor space! The first computers were so big and they used to occupy huge rooms.

The size of computers was reduced gradually over time and the storage capacities were improved drastically as well. Development of the microprocessor was one thing that lead to the evolution of the early computers.

Today there are countless types of personal and desktop computers. There are portable PCs, laptops, desktops, palmtops and so on. The ways that a personal computer works with many different types gadgets is incredible. Now that prices for personal computers have dropped drastically, even schools in poor and developing countries can afford to have them.

Below we have listed some facts about personal computers, some of which you might know and others might actually surprise you. Read through them and see if you can learn something that you didn’t know.

✦ One amazing fact about personal computers is that early hard drives in them held just 20 Megabytes of data and the price for these was about $800.

✦ Computer historical facts tell us that the 1st commercial computers were 1st introduced in the year 1951 by John W. Mauchly and John Presper Eckert. It wasn’t until 1953 that IBM (International Business Machines) got into the computer market.

✦ The 1st mouse for a computer was introduced by Douglas Engelbart at a Computer Expo in San Francisco California in the year 1968.

✦ The 1st computers for consumer were introduced 1974 by IBM.

✦ The man considered to be the father of Internet, Tim Berners-Lee coined the phrase ‘World Wide Web’ for the first time in 1990.

✦ The first web browser was named Mosaic and it was released in 1993.

✦ Steve Jobs & Steve Wozniak built their 1st Apple computer from parts that they gotten free from their employers.

✦ The computing power in a modern cellular telephone has more processing power than the computers combined that were in the Apollo 11 Lunar Lander.