Uses and Properties of Bituminous Coal 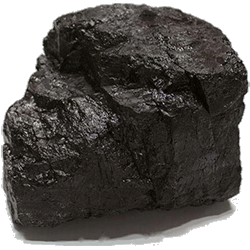 Bituminous coals also called soft coals or black coals are the group of coals that are the most abundant. It’s the type of coal that is most widely used in our world today. It’s been named so because of the presence of a tar-like & gluey type substance that is known as bitumen.

High grades of bituminous coals can be found in the Appalachian regions of the states of Ohio, Kentucky, Pennsylvania, & in West Virginia. The highest production of this type of coal is in the state of West Virginia, then followed by Kentucky, then Pennsylvania & finally Ohio. There are substantial deposits of this type of coal also found in Colorado, as well as in the Midwest states of Illinois, Indiana, & Missouri. A Lower grade of bituminous coal can be found in the states of New Mexico, Alaska, Kansas, Wyoming and Utah.

It’s been discovered that bituminous type coal covers about 52 % of the US coal reserves. It is approximately 100 to 300 million years old.

It is completely opaque & soft

It is banded, or layered & dark gray to black in color

Bituminous coals usually also have closely-spaced fractures found in them. Cleats also form in 2 different sets, both at right angles to each other.

Bituminous coals are very highly combustible & they release an excessive smoke as well as soot if they are not burned in a proper way. The main pollutants that come from bituminous coal are sulfur oxides, particulate matter & nitrogen oxides.

The sulfur that’s present in a higher degree in this type of coal can bring acid rain.

This coal type has heating values that are 10,000 to approximately 15,000 British thermal units (also called BTU’s) per pound, this is quite higher than that of a lignite or sub-bituminous type coal.

They have a much lower fixed carbon & a much higher volatile content than that found in anthracite.

Bituminous type coals have just 2 subtypes call steam coal / thermal coal & metallurgical coal. Metallurgical coal also called coking coal is coal that is baked in ovens in complete absence of oxygen and at great temperatures as high as 2010°F. This type of process is what is called pyrolysis. In this type of process, the coal is melted & all of it’s volatile constituents & impurities are there by driven off. Finally, the end product that is produced is a pure liquefied carbon which solidifies.

As for the most part, bituminous type coal contains a glassy type of material that is called vitrinite. It’s composed of minerals, of which it gets this trait from a woody plant tissue.

It’s used for a fuel to produce the steam that runs train locomotives.

This type of coal was also previously used for a fuel for in domestic / home water heating.

Coking coal or metallurgical coal has a high heat resistance & it’s used to create a product called coke (not the soft drink), which is then added to a blast furnace and combined with iron ore as well as limestone to produce steel.

Bituminous coal is made free from sulfur, ash, as well as some other impurities, & it’s used in coal forges, in which metals are heated & then shaped.

Due to the many different serious pollution issues that bituminous coal produces, the electric power plants found in the United States as well as some of the European countries have set up their coal burning power plants with cleaning devices that are used to minimize their air pollution emissions.